“Abstract: Kittler’s complex relationship to McLuhan can be understood through Harold Bloom’s notion of apophadres: a way of acknowledging one’s predeces[1]sor that suggests the predecessor is derivative of his successor. Kittler invokes McLuhan at key points in his mediatic elaborations, only to undermine those references preposterously: that the “post” precedes the “pre.” From his writings on war to his Hellenistic last phase, Kittler positions McLuhan as the ambiguous Kilroy who was “here,” only to disappear when one looked again. The hinge of Kittler’s complex relationship to McLuhan was Kittler’s anti-anthropomorphism. This too was a Kittler construct; while McLuhan was concerned with the anthro[1]pocene at the end of his career, it was Kittler in his last phase who embraced the anthropomorphism of gods who acted like humans.”

(13-14): “War, thus, is not a contained event for McLuhan; it is an ongoing concomitant of technology: ”[c]ivilization” he writes “[is] the mother of war” (24). Hence, Napoleon and semaphores and right-hand traffic (102-111; cf. Kittler, “Free Ways” 55). Hence “[t]he First World War [as] … a railway war, [was] enormously exaggerated in scope and destruction by the extension of industrialism and the enlargement of cities” (132)—or, as Kittler echoes, electronics “not only make large cities (pace Marshall McLuhan) into global villages; it also makes them just as easily destructible as villages” (“Playback” 107). WW2, writes McLuhan, “was a radio war as much as it was an industrial war” (132), the radio having the effect “of switching the vision of a whole population from visually conceived objectives to the total field of polarized energies that automatically goes with radio and auditory space” (133).”

(16): “Kittler’s anti-anthropomorphism allowed him to pursue a trajectory that is clearly allied with McLuhan’s while appearing to reject it, leading Kittler to the most telling aspect of his interest in war, and particularly WW2: the impulse to make the human into a machine.”

(27): “Elisabeth Weber has commented that the two books of Musik und Mathematik “start and end with the sirens. Love coincides here with music in the truth event of the sirens whose name Kittler translates as muses and as incarnations of Aphrodite, thus as lovers.” Kittler must have known, however, that the concept of anthropomorphism was coined by Xenophanes precisely to critique Homer’s attribution of human qualities to the gods. Kittler’s Aphrodite is thus compelled to make love as a cultural technique— she is the first mechanical bride, the avatar of her husband’s robots.”

“[T]he crux of [McLuhan’s] original theory of media and power seemed to be most alive within feminist scholarship on technology. And by critical feminist approaches I mean in particular the work on technology that does not treat difference and identity as if it is an addendum to technology but rather scholarship that understands how technology alters and can determine the social experience of gender, race, sexuality, and other forms of social difference. … [C]ritical feminist, race, queer, and Indigenous media scholars, artists, and activists … have been doing the critical work of locating how exactly the medium is the message. Their media study shines a light on the ways that inequitable power dynamics are tied to the properties and capacities of technologies that mediate power in social and institutional spaces. … [F]eminist scholars ask me, ‘But you don’t really like McLuhan, do you?’ I am not so much concerned with the man or his legacy as I am with the way in which his media theory has inspired me to think about power and structural differences.

“Introduction: A Feminist Medium is the Message”

“McLuhan’s media theory has much to offer feminist media studies. This is the central claim of this volume. … McLuhan’s failure to acknowledge the dynamics that bind together bodies, rhythms of life, power relations, and technology should relegate him to the tired domain of great white mail legacies. Instead, I have found that his insights inspire a new critical project for feminist media studies. … McLuhan had a quite telling and instructive treatment of gender in The Mechanical Bride. … [H]is focus was not just on the objectification of women’s bodies in advertisements but on the ways women’s bodies were instrumentalized and rationalized to mirror the relationship between finance and engineering. We are also inspired by Anne Balsamo’s Technologies of the Gendered Body, which takes a cue from McLuhan’s focus on the creative possibilities that come from understanding how new ‘media work us over,’ but more specifically how media works upon bodies differently. Balsamo reads in McLuhan ‘a submerged discourse of gender that continues to organize and make intelligible the discourses of the body in late capitalism.’ … While recognizing the earnest efforts of … scholars to find a place for women in [McLuhan’s] work, Re-Understanding Media does not need McLuhan to be a feminist. … Finding the women in McLuhan’s work or listing the women who have written about McLuhan does not indicate feminist engagement. … [I]t universalizes the category of woman while forgetting that being a woman is not the same as being a feminist. …  Anthony Enns argues that the lack of political engagement within McLuhan’s work has long been regarded as one of the main reasons his work is rejected and even ridiculed as unserious scholarship. … When McLuhan’s theory is fully engaged it offers it offers a political understanding of media beyond content and of technology beyond a tool. … This book also extends McLuhan’s pivotal broadening of the scope of which technologies are understood to be media. … McLuhan’s media theory insists on both the ontological and epistemological power of media. Through McLuhan we can understand how the medium sets the parameters possibilities for not only communicative action but political and social change. … McLuhan’s understanding of technology as a form of power raises new questions about representation, ideology, policy, and even political economy, whether he addressed them directly or not. … McLuhan’s theories of media challenge the dominant cultural understanding of technologies as tools whose effects depend upon their use. In fact, that technologies are even imagined as tools (neutral in and of themselves) that depend on policy changes, shared forms of control, or perceived as in need of more diverse representation in their development is part of today’s dominant techno-logic. What gets built and designed is determined by the requirements of patriarchy, capitalism, and white supremacy. … What this moment demands is the exact type of media study that McLuhan suggests. If we are interested in new objects like sex robots, we might treat them like McLuhan’s light bulbs and think, along with feminist labor theorists, about the new technology constituting a shift in patterns of labor and types of work, giving rise to new pathologies.”

“McLuhan’s definition of transportation technologies, as media that transport, translate, and transform people and things, is central to the ways that Black people continually re/un/make ourselves via transport. … Indeed, if we use McLuhan’s concept of transportation as media, then we can see that to be transported and transformed did not always require the same concepts of movement as white people or even the use of their technologies to become free. Combining McLuhan and Black feminist studies, we might ask, how have Black people used media to imagine new futures that their white counterparts could not?”

“The American Government was the first to be founded on the concept of public opinion. Such a concept still seems bizarre in Canada. It was the new medium not of the book but the press which shaped the U.S.A. And this creates a political crisis with the passing of the press into the entertainment limbo, and with the rise of TV as a political shaper. But it has been the typical mistake of literate cultures to regard entertainment as non-political. Russia made no such slip. What is to be expected in the mainly non-literate India and China, countries which are in a position to by-pass literacy and proceed at once with radio and TV? These countries represent high cultures which are almost entirely oral and pictographic. Their rapport with TV far exceeds our own. If the new medium of the press gave a radical imprint to American politics, how much more might the new medium of TV be ordained to shape power patterns in the Orient? Should this occur, our own political structures, tied to print, would be quite unable to catch up.” (119-120)}

“I have referred to the work of Marshall McLuhan several times in this article, partly to show the difference between Western conceptual / rational thought, and partly because McLuhan was a brilliant thinker and has had, as we all know, an undeniable influence on contemporary thinking about media and culture. He is indeed one of the truly visionary thinkers of the twentieth century. But there is another reason I have continued to return to him. He seems to have had a truly innate sense of what we might call ‘the Indigenous imagination.’ So, as much as I object to McLuhan’s ‘Tribal man,’ I am still amazed by his insight into an area into which other Western theorists fear to tread. And sometimes he just nails it. When he writes, ‘The function of art in a tribal society is not to orient the population to novelty but to merge it with the cosmos. Value does not inhere in art as object but in its power to educate the perceptions.’ ‘[I]n a homogenous mechanized society, the individualist role of the training of perception hardly exists. The primitive role of art serving as consolidator and as a liaison with the hidden cosmic powers again comes to the fore.’ I think, wow … now you’re seeing like we see. The distinctions he makes here are far from inconsequential. McLuhan distinguishes an epistemological concern that I would argue can be attributed to a North American Indigenous cosmology—an Indigenous cosmology that incorporates and integrates Indigenous philosophies, epistemologies, histories, traditions, ritual, ceremony, spiritual practices, and stories in ways of thought, of being, and of artistic and intellectual practice.” (181-2)} 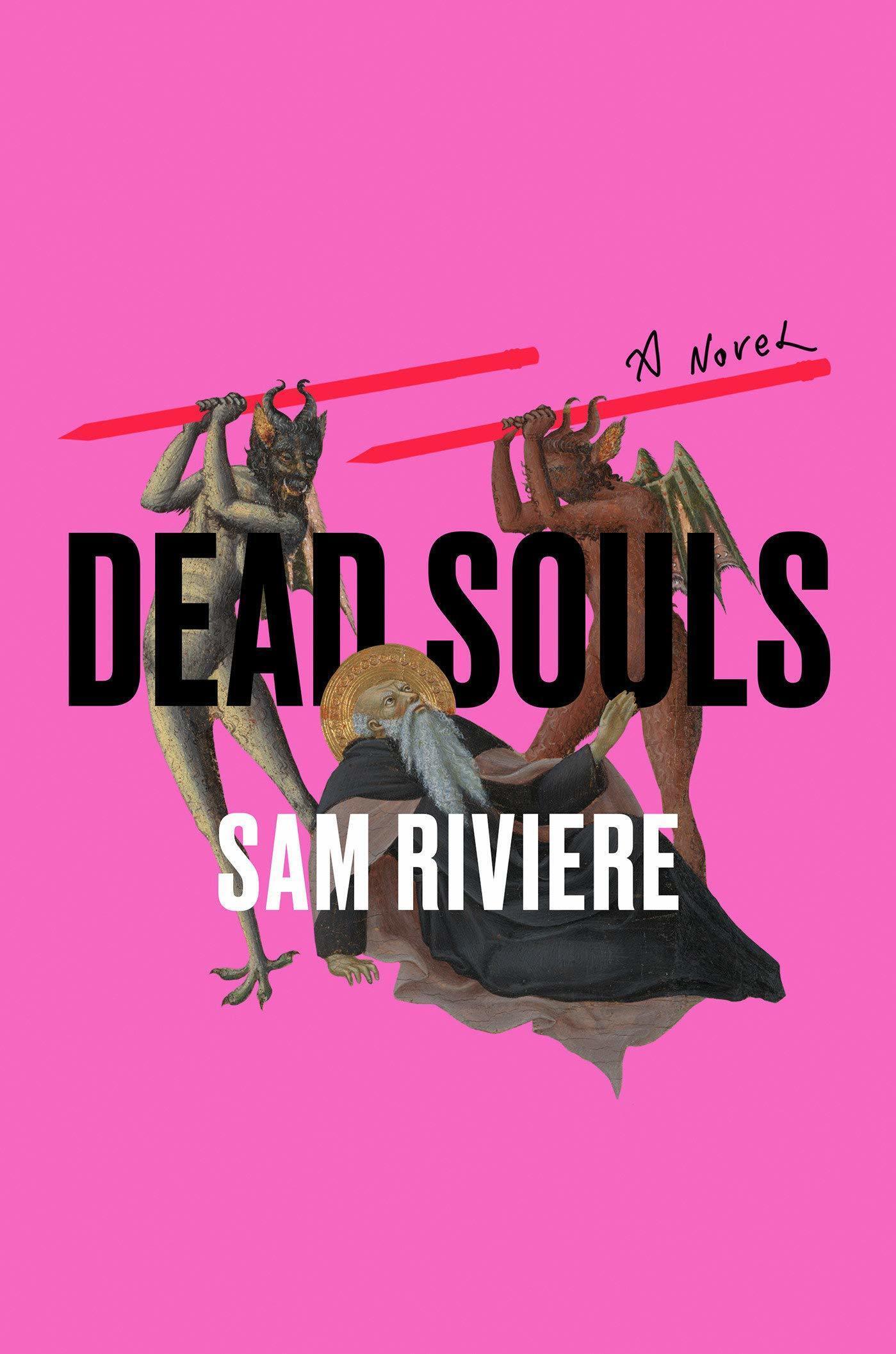 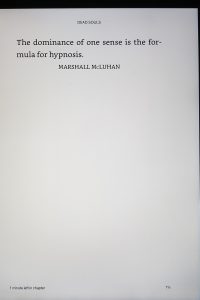 “McLuhan’s view is that mediums matter more than content; it’s the common rules that govern all creation and consumption across a medium that change people and society. Oral culture teaches us to think one way, written culture another. Television turned everything into entertainment, and social media taught us to think with the crowd. All this happens beneath the level of content.”

321-2:  “Fuller was sometimes inclined to put his new friend [McLuhan] in his place. ‘McLuhan has never made any bones about his indebtedness to me as the original source of most of his ideas,’ Fuller said privately. ‘The “global village” indeed was my concept. I don’t think he has an original idea. Not one. McLuhan says so himself.’ He dismissed the philosopher’s most famous aphorism, “the medium is the message,” as ‘the message only of yesterday’s middle-class elite,’ and he insisted that McLuhan had always conceded, ‘Bucky is my master. I am only his disciple.’”

25:  “She laughed. Her sense of humor was the more delicious for being buried. But she stopped laughing rather suddenly, and in the silence that followed you could tell she was almost desperately serious. ‘Of course,’ she said, trying to keep it light, ‘it’s hopeless expecting anything much in conversation with a writer. It all goes into the printed page. But I’m getting pretty impatient with the printed page, among other things. McLuhan’s probably right. It’s no good expecting the answer in the Word.’”