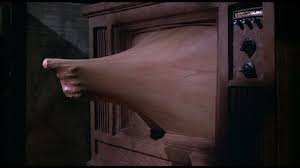 J.D. : Mm… I think that there is an ideology in McLuhan’s discourse that I don’t agree with, because he’s an optimist as to the possibility of restoring an oral community which would get rid of the writing machines and so on. I think that’s a very traditional myth which goes back to… let’s say Plato, Rousseau… And instead of thinking that we are living at the end of writing, I think that in another sense we are living in the extension – the overwhelming extension – of writing. At least in the new sense… I don’t mean the alphabetic writing down, but in the new sense of those writing machines that we’re using now (e.g. the tape recorder). And this is writing too.”

84: “We may say that in general McLuhan understood literacy as creating dichotomies. He seems to have taken as paradigmatic the transformation of the binary pair of two people engaged in dialogue into the dichotomy of book / reader. Likewise, we may interpret Nietzsche’s discussion, in The Birth of Tragedy, of the splitting off of the Dionysian and the Apollonian as the creation of a dichotomy. Since McLuhan took his paradigm for the development of Western culture from Nietzsche (the Dionysian is cool, the Apollonian is hot), we may interpret his statements to the effect that literacy tends to create dichotomies, and that cool media tend to resolve those dichotomies into binary pairs.”

159: “[McLuhan] was hardly an unfamiliar name. Already the Toronto communications theorist was heralding the imminent collapse of the old distinctions between high art and popular culture, and among the various media themselves; and he was foretelling the rise of a new culture of perverse, punning, genre-blurring media consciousness from those ruins.”

195: “In trying to extend the idea of art and to think beyond the traditional distinctions of painting, drawing and sculpture, Baxter, like other artists, was led into the area of communications. Contemporary life is full of mobility and change; and many contemporary artists have been interested in the rapid exchange of ideas, rather than embalming ideas in fixed objects. Baxter admits a large debt to Marshall McLuhan, who admired the artist’s ability to see things in a new light and predicted an important role for artists in helping the rest of society assimilate the technological changes introduced by new media. By 1969, the N.E. Thing Co. was developing conceptual works for transmission by telex and telecopier. The aim, as Baxter suggests in a later interview, was to explore the way in which information media alter our perceptions and relationship to the world around us: “By using media, you can penetrate anywhere, and be in touch, and that’s what the world is all about right now.”