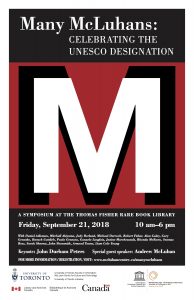 “Having developed a discourse of technology that dramatized its Frankensteinian pretext and globalized its scope, McLuhan and his media theory have been popularized globally in a multimedia range of adaptations that, in turn, further amplify that discourse to such an extent that, today, we cannot use the word technology without conjuring the spectres of both Frankenstein and McLuhan” (101)

415: “A generation ago, media theorist Marshall McLuhan observed of the technologically mediated communications of his day that the ‘medium is the message.’ What McLuhan meant is that radio, television, and so on, are not neutral carriers of meaning, but themselves intensify, magnify, or otherwise alter the ‘scale’ of our relations with one another. Today’s interactive media, however, take this ‘message’  to a whole other level. If as Ian Bogost observes ‘the logics that drive our games make claims about who we are, how our world functions, and what we want it to become,’ it must be emphasized how much those logics are amplified by the interactive nature of the medium, and in what ways that arguably correspond to a qualitative, not merely quantitative, transformation of the human personality. Anyone who has careened down the virtual streets of Chicago in Project Gotham Racing (Bizarre Creations, 2001), or joined a platoon of Marines patrolling the dusty streets of a Middle Eastern city in Call of Duty (Infinity Ward, 2007), can attest to the visceral power of the medium and to the degree to which intense player involvement heightens the psychological cathexis between human, machine, and onscreen narrative. While the video games industry disavows any connection between kids shooting virtual humans in the head and real-life mass shootings by children in our schools, the same industry in other market sectors routinely boasts that video games are without peer among media in shaping human behavior and psychology.”